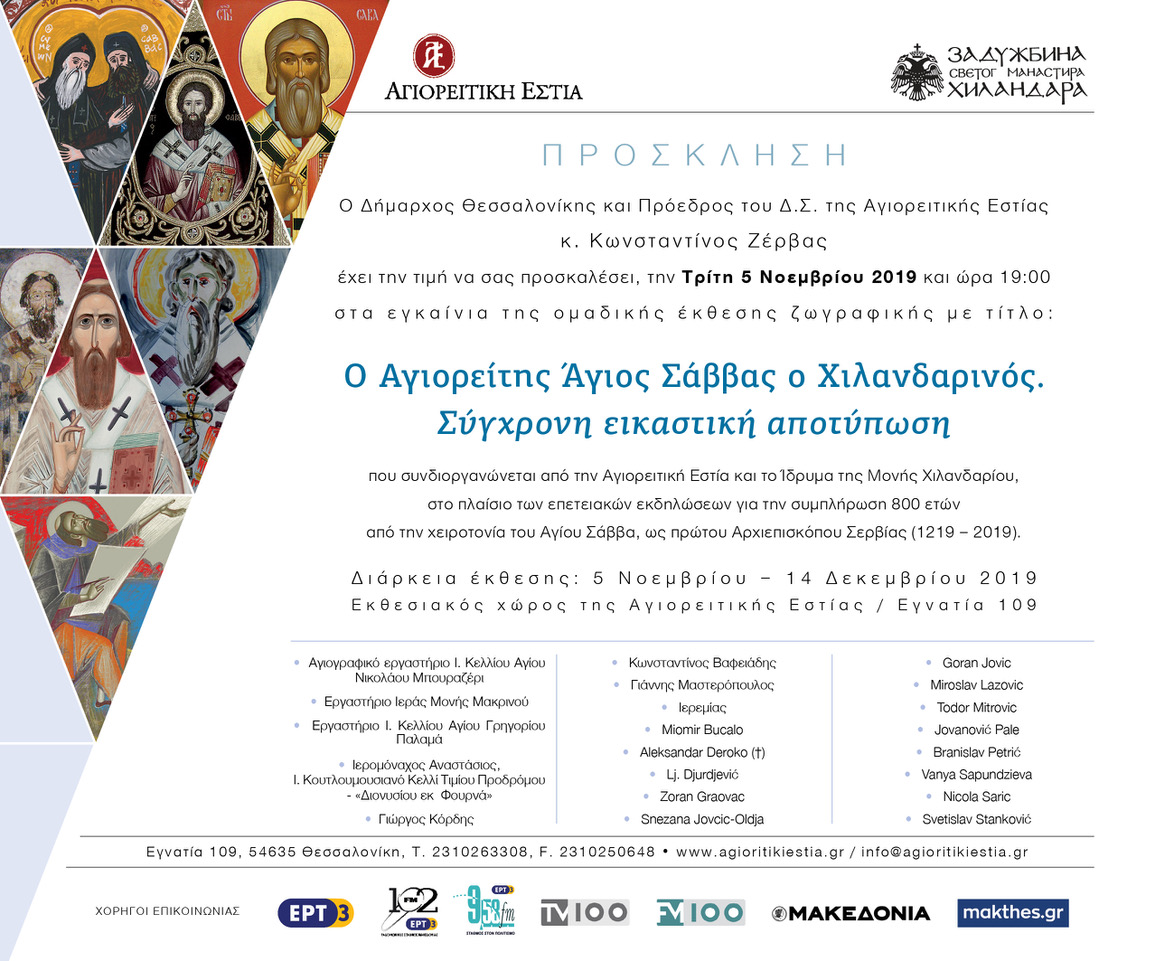 On the occasion of the 800th anniversary of the consecration of the Athonite Saint Savvas of Chilandar Monastery as the first Archbishop of Serbia (1219-2019), and as part of its programme of commemorative events scheduled to take place in both Thessaloniki and Belgrade, the Mount Athos Center, together with the Chilandar Monastery Institute, is organising a group exhibition of paintings featuring modern artistic representations of St. Savvas. The exhibition will be inaugurated on Tuesday 5 November at 7 p.m. by the Mayor of Thessaloniki, Mr. Konstantinos Zervas, in the galleries of the Mount Athos Center (Egnatia 109, Thessaloniki).
This exhibition forms part of the broader programme of commemorative events organised by the Mount Athos Center, which includes the publication of a commemorative volume on the life and work of St. Savvas, the translation and publication of the first biography of St. Savvas by Domentianos, and also the organisation of a one-day conference within the framework of the 4th International Scientific Workshop due to be held in Thessaloniki on 7-9 December 2019. Further information on these events will be released in due course. Similar events are due to be held in Belgrade.

Browse all areas of the exhibition by clicking and dragging in the box above. Double-click to navigate full screen. Zoom in with the mouse wheel.

According to the exhibition’s Scientific Organising Committee, ‘2019 marks the 800th anniversary of the year (1219) in which the Ecumenical Patriarch Manuel I Sarantinos received the Athonite monk Savvas of Chilandar Monastery at Nicaea in Bithynia and consecrated him as the first Archbishop of Serbia, thereby founding the Church of Serbia. This event is not only of special significance to the Serbian Church and nation but is also of importance to Mount Athos as the monk (and later saint) Savvas of Chilandar Monastery was an illustrious spiritual figure on the Holy Mountain. He was the initial founder of Chilandar Monastery and a generous patron of many monasteries during what was a difficult period for Mount Athos. He also played an important and catalytic role in the organisation, strengthening and spiritual instruction of the newly established Serbian Orthodox Church, as well as in the establishment of the Serbian state through his works of an institutional nature, the most important of which is the ″Nomocanon″.’

In his message of greeting, His Most Divine All-Holiness the Ecumenical Patriarch Bartholomew states that: ‘The great saint of the Serbs, Savvas, is an emblematic figure who left his mark on the history of the Serbian Church and people. He is the connecting link between this pious people and the Holy Mountain of Athos, where Savvas was tonsured a monk and founded the Holy Monastery of Chilandar, together with his father Stefan-Symeon. Saint Savvas, however, also serves as a link between Serbia and the Ecumenical Patriarchate since in the year 1219 he was consecrated as a bishop in Nicaea by Patriarch Manuel I Charitopoulos and served as the first Archbishop of Pekion of the newly established Serbian Church. His contribution to the organisation and spiritual development of the Church, as well as its strengthening against the Bogomils and Latin influence, was decisive not only for the Church itself but also the history of the Serbian nation and the identity of the Serbian people.’