NEW PUBLICATION by the Mount Athos Center GEORGE POUPIS Exaltation: The Cross in the Land of Mount Athos 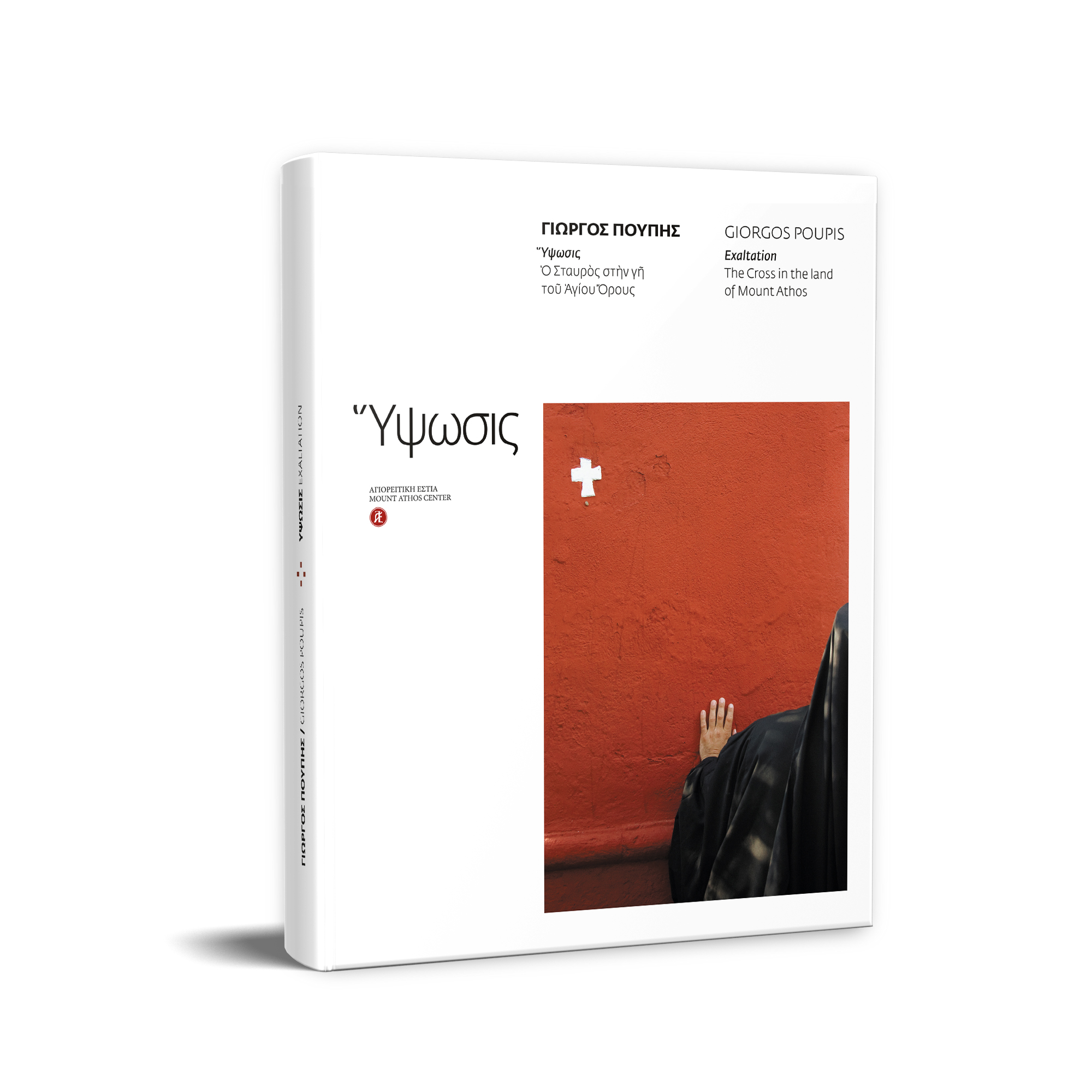 The publication includes addresses by His Most Divine All-Holiness the Ecumenical Patriarch, the Holy Community of Mount Athos and the Mayor of Thessaloniki and President of the Board of Directors of the Mount Athos Center, Mr. Konstantinos Zervas, as well as a text by Archimandrite Vasileios Gontikakis, the abbot of Iveron Monastery, entitled ‘The Cross (and the crosses) on Mount Athos’ and a short text by the photographer himself.

Among other things, Archimandrite Vasileios writes:

“A band of children – grey-bearded, most of them – playing after death in Paradise. Forgotten by the world, yet they remember and glorify Him who deigns to accept all things ‘to bestow on all the resurrection from the dead’.  They take up their personal cross, looking to Him who of His own will was lifted up on the Cross and conquered death by death.
‘Through the Cross, joy has come to all the world’.  He is with them. And they sing aloud and to themselves, because it is their lived experience: ‘How divine, how dear, how very sweet is Your voice, O Christ; for You have given us a sure promise to be with us to the end of the world’.  And the unheard melody and fragrance spread out across the earth.
They took to the mountains and fled the world, and they found Him who sacrifices Himself ‘for the life and salvation of the world’.
He becomes their light, their breath, their life. And ‘the life was the light of men’ (John 1:4). They feel themselves incapable and unworthy of such an honour. And He continues to love them. They stagger under the weight of the blessing. And they put their trust in Him, not in themselves; because they experience Him as joy and benefaction and divine gift.”

George Poupis himself declares in a confessional vein:

“…I have travelled over almost all of the Holy Mountain, not in order to record all the different types of outdoor crosses but in order to find out which one would convey the reason for its existence most effectively to me. Fortunately, there were many such crosses, and some of them convey the reason for their existence even before you see them.
Holiness is not about coming first in the race but mainly about taking part in it, the joy of running the race, the joy of having a relationship with God, the joy of taking part in the game of earthly life without fretting about coming first or second, because the last will be first and vice versa. This charming humility is exuded by the outdoor crosses of Mount Athos; whether they are on domes, on ancient walls, fences or wayside chapels, or on trees, rocks or other points of the created material world, they all evoke the resplendent truth of the uncreated essence. This is what I wanted to explore with my art, and then communicate the results in an appropriate form.
I humble revere their divine Grace...”

View the embedded image gallery online at:
https://www.agioritikiestia.gr/en/george-poupis-exaltation#sigProId4b3e86d279
In 2017, in collaboration with George Poupis, the Mount Athos Center began to prepare the publication described here together with the accompanying exhibition of the same name. During the preparations, the photographer expressed his desire that his photographic archive containing material on Mount Athos should be made over to the Mount Athos Center, a wish that was eventually fulfilled by his sister, Panayiota Poupi. This archive now belongs to the Mount Athos Center and, once it has been documented and digitised, will be made available to the general public.

The publication constitutes the catalogue of the accompanying exhibition, which has already been mounted in the gallery space of the Mount Athos Center and will be opened to the public as soon as circumstances allow. 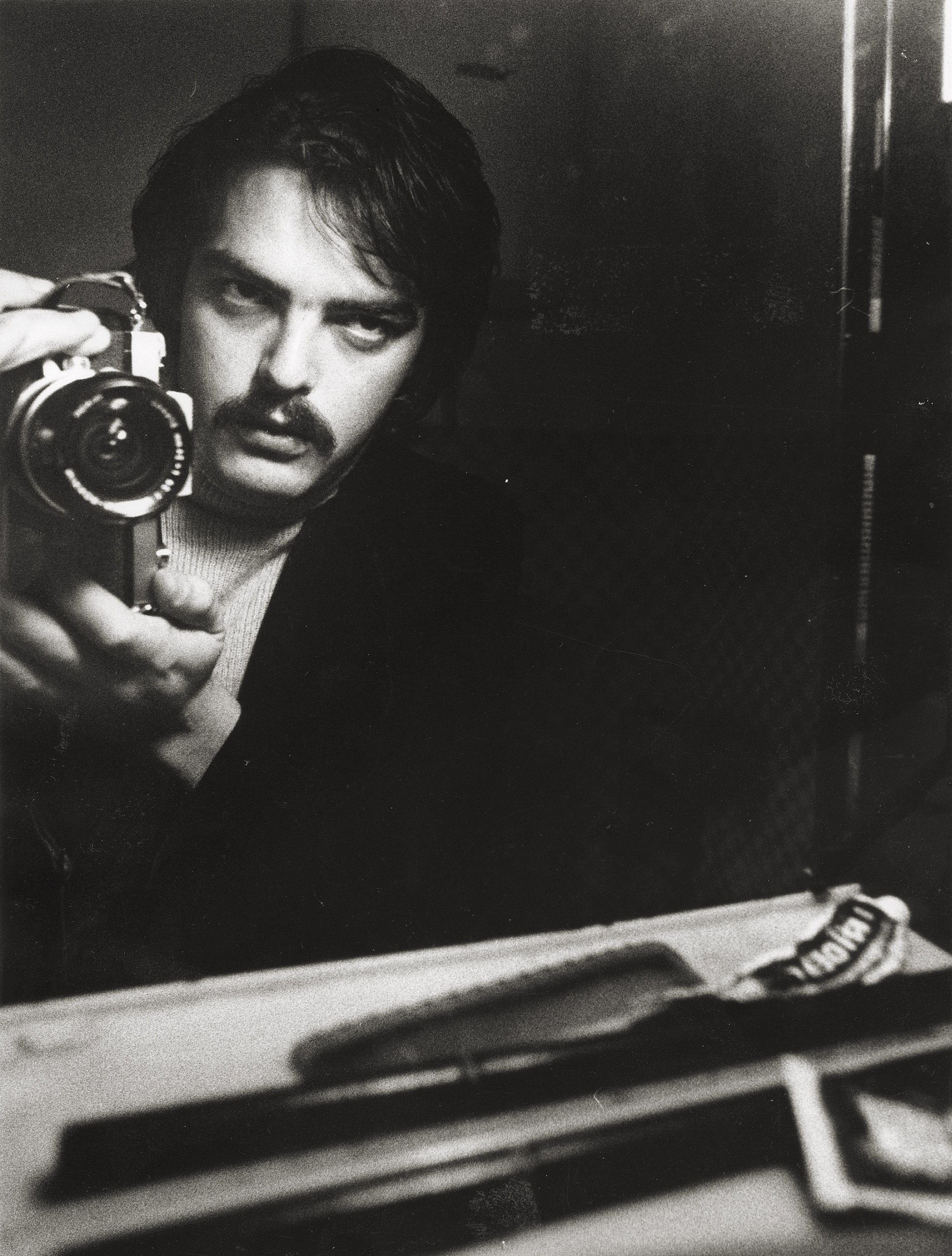 George Poupis was born in 1950 in Ptolemaida, where he lived until 1968. Later, he left for Italy in order to study architecture in Milan. During his studies he took up photography, learning the art under a number of famous photographers, and in 1975 settled in Paris, where he attended lessons in photography and the plastic arts.  At the same time, together with the poet Andreas Pagoulatos, he began a series of interviews on the theme ‘Greekness and modern art’ and became closely associated with important cultural figures in the Parisian Greek community, such as Yannis Tsarouchis (for whom he worked as his personal photographer), Iannis Xenakis and Nikos Kessanlis, among others.
After a decade away, he returned to Greece and settled in Thessaloniki, where he collaborated with a number of foreign and Greek agencies and historic magazines.  He was a key associate of the ‘Thessaloniki Cultural Capital of Europe 1997’ Organisation and also exclusive photographer for ‘Panselinos’, the culture supplement of the Makedonia newspaper. For many years he also collaborated with the late lamented Manolis Andronikos at Vergina and Demetris Pantermalis at Dion.
Poupis travelled widely in Greece, Asia Minor, Egypt and Jordan, where he photographed monuments, scenes of everyday life, urban landscapes and the countryside. A highly cultured individual, he loved music, reading and especially painting, and it is no accident that many artists entrusted him with photographing their work. He was an artistic photographer for whom everything was ‘a question of aesthetics’, as he characteristically used to say in conversations with others.
George Poupis held numerous one-man shows both in Greece and abroad: in Paris; at the Galeria Diaframa in Milan; at the ‘Eirmos’ Gallery in Thessaloniki (Poppies, 2004; Figures, 2005); in the exhibition spaces of the Mount Athos Center (Panagia Portaitissa: Perpetual Blessing, 2004); at the Photography Centre of Athens, at the Evgenidis Institute (Sifnos: Light and Shadows in the Neighbourhood of the Blue, 2005; in Patras, as part of its Cultural Capital of Europe celebrations (The 70s Generation); at Artemonas on Sifnos; at the ‘Mylos’ Multi-Purpose Cultural Centre in Thessaloniki (The Spirit of Wine), and at the Museum of the Thessaloniki Water Board (Water Routes in Thessaloniki, 2011).

For telephone orders and further information please call 2310 263308 & 2310 250648 or email us at  This email address is being protected from spambots. You need JavaScript enabled to view it.