Fourth International Scientific Workshop of the Mount Athos Center and one-day conference on the life and work of St. Savvas of Chilandar

Venue: Stephanos Dragoumis Auditorium at the Museum of Byzantine Culture


For the fourth year in succession, the Mount Athos Center is organising its International Scientific Workshop, an institution that has now become an annual event, an important meeting-place for the scientific community engaged in research relating to Mount Athos,  and, judging by the large number of researchers from Greece and abroad wishing to participate in it, an event of considerable international significance. 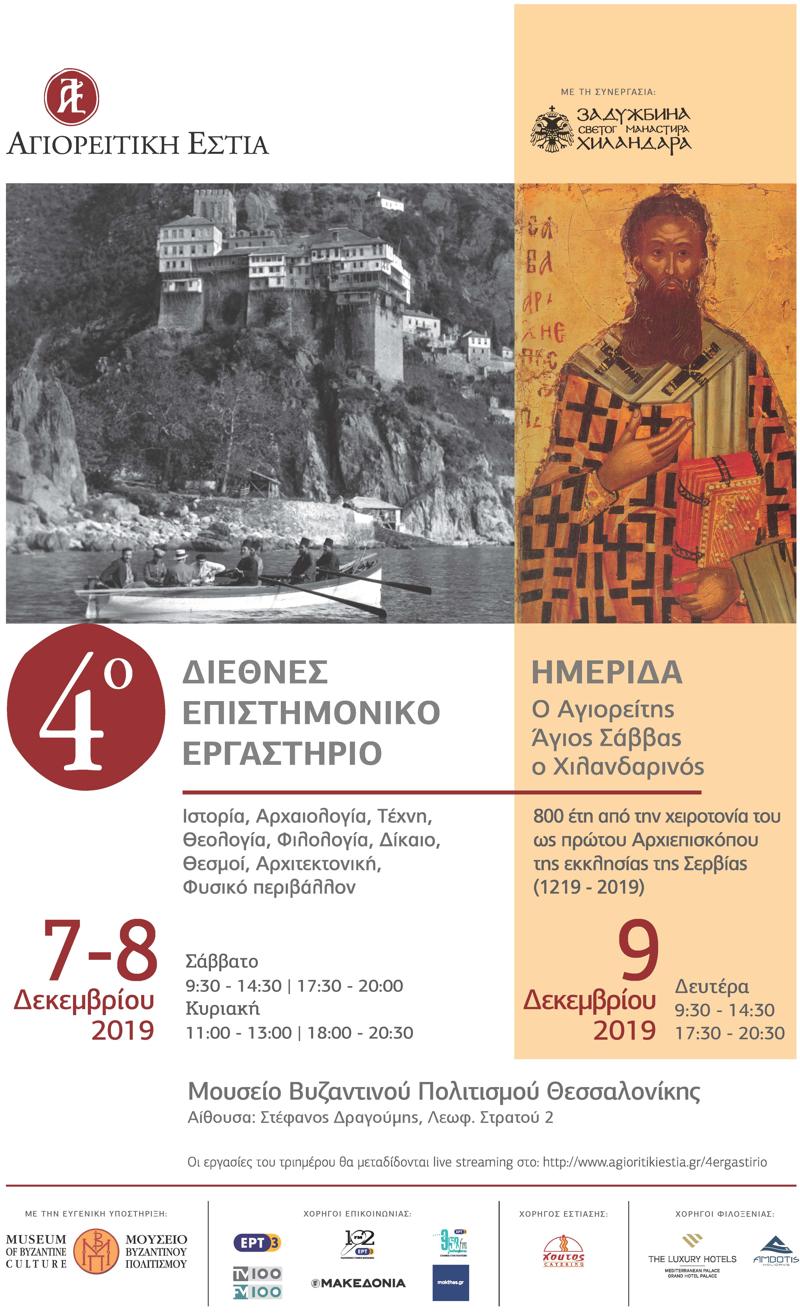 The success of the first three Workshops, at which over 65 either completed or ongoing research projects were presented, together with the great interest shown in the Workshops’ proceedings by members of the non-specialist public who have a fond interest in Mount Athos, demonstrates that the Mount Athos Center, faithfully committed to pursuing the goals of its Charter, is striving hard and succeeding in its aim to disseminate scientific knowledge about the Athonite state, a place of countless treasures and inexhaustible history.

This year, within the framework of the Workshop’s proceedings, we have included a one-day scientific conference devoted to the life and work of the Athonite monk St. Savvas of Chilandar. The conference is being organised to mark the 800th anniversary of the foundation of the Church of Serbia and the consecration of St. Savvas as the first archbishop of Serbia. These events, of course, are of particular significance to the Serbian Church and nation, and at the same time equally significant for Mount Athos since the monk, and later saint. Savvas of Chilandar was one of the Holy Mountain’s most illustrious spiritual figures. He was the first founder of Chilandar Monastery and     a generous patron for many other monasteries during what was a difficult period for the Holy Mountain. Members of the public and the scientific community will have the opportunity to learn about different aspects of the personality, life and work of St. Savvas from the research projects carried out by Greek and Serbian researchers who have been invited to present their work without any financial gain for themselves and to write the texts that will be presented at the conference and then will later be included in the commemorative volume that is being prepared on St. Savvas and is scheduled for completion in 2020.


The opening ceremony of the Fourth Workshop will be held at 10 a.m. on Saturday 7 December 2019 in the ‘Stephanos Dragoumis’ Auditorium of the Museum of Byzantine Culture in Thessaloniki.

The Workshop’s proceedings will take place over the course of Saturday and Sunday and come to a close on the evening of Sunday 8 December 2019.
The one-day conference will commence at 9.30 a.m. on Monday 9 December 2019 and will finish at 8.30 p.m. on the same day.

Each presentation at the Workshop will last 20 minutes and will be immediately followed by a 10-minute discussion.


Scientific-Organising Committee of the Workshop

Scientific-Organising Committee of the one- day conference on the life and work of St. Savvas of Chilandar


With the kind support of the Museum of Byzantine Culture